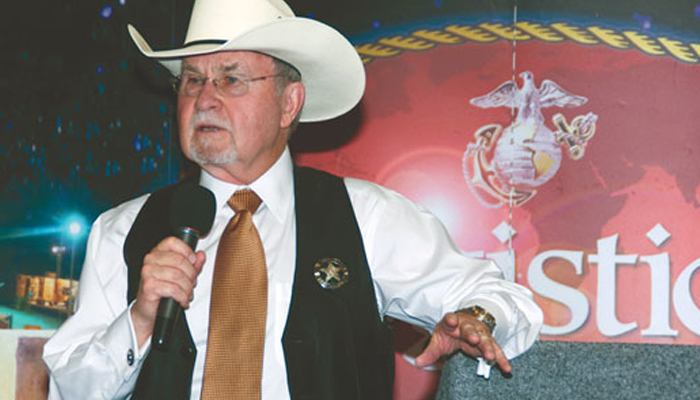 J.B. was continuously elected Sheriff of Smith County Texas from 1976 to 2012 making him one of the longest serving sheriffs in Texas history. He was elected by his peers to serve as President of the Sheriffs Association of Texas 2002-2003. J.B. retired on January 1st, 2013.

He managed a department of 350 personnel and over 1000 prisoners.

He is a graduate of The University of Texas at Tyler with a Bachelor of Science Degree in Criminal Justice. He is also a graduate of the National FBI Academy.

As sheriff for over 3 decades he was responsible for the investigation of 146 murder cases, hundreds of sexual assaults, child molestations, aggravated assaults and countless burglaries and thefts. When you add numerous family violence cases involving children it can cause depression in the strongest of men including him.

To compensate for the everyday trauma, the sheriff started looking for positive things that produce humor. That attitude adjustment evolved over 20 years into a “Laughter is Lawful” program that has been presented hundreds of times from New York to L.A. He is booked by speaker bureaus from Boston MA, Tulsa OK, and Texas.

As a Vietnam veteran and sought after humorous speaker, the sheriff was contracted in 2011 by the Dept of Defense to be the keynote speaker for the Navy Seals returning from war zones. This expanded into programs for Marine Special Forces as well. These programs spanned four years and is one of the highlights of his speaking career.

For information on having Sheriff J.B. Smith, humorist, speak to your club or organization, or to request a date, please fill in the following form. Email the Sheriff at jb@sheriffjbsmith.com.